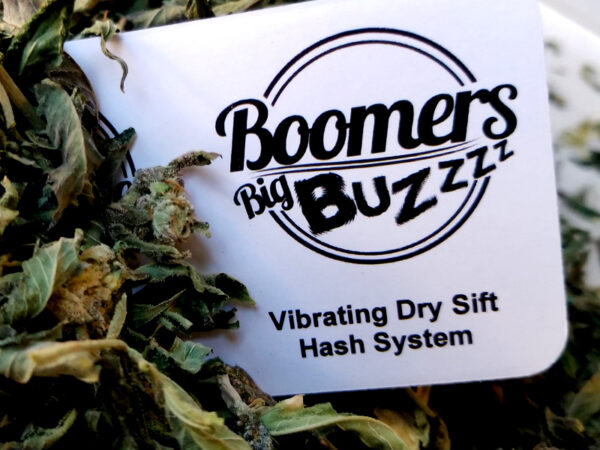 Be the first to review this product

The Big Buzz dry sift vibration table is a powerful 25″ x 36″ 4 screen vibratory system,  that drastically reduces dry sift processing time from hours to minutes!  Traditionally, dry sift processing has been done entirely by hand carding plant material across screens.  This time and labour intensive process has unfortunately made the commercial production of hash cost prohibitive for many mid-size extractors.

The good news is that the Big Buzz dry sift table system offers not only time savings, but it also produces consistent yield results and maintains quality control of the end product.  Variable vibration settings can be set, controlled and easily replicated for every batch.  The 4 screen system, offers three end product grades.  You can use 1 screen or all 4 or add a few more if you choose.

High potency 6 Star results can be seen in a few seconds to a few minutes (depending on the strain).  However, if large quantities of farmers grade hash is desired, simply adjust the frequency and let your Big Buzz run for 15 minutes or more.    Either way, you will love the performance and yield from this system!

“Everything in Life is Vibration” – Albert Einstein.

Here’s How it Works

The commercial industrial strength vibrating table system mechanically separates and extracts pure resinous trichome glands from hemp and cannabis plants.  The powerful vibration frequency and amplitude settings have been technically engineered for this industry and are proprietary to Wacky Willys.

The Big Buzz has a specific vibrational energy calibration that gently moves buds, leaf and trim material in a back and forth bouncing motion, oscillating each bud and leaf across the screen. By adjusting the vibrational energy intensity (amplitude) and frequency (Hertz) you can regulate how your buds or trim react to the waves of vibration.

You are in total control of  the variable vibration frequency; gently bounce your botanical or crank up the hertz and let it rip!  Whatever setting and length of time you prefer, can be easily repeated for the same results every time.

The Big Buzz allows you to achieve maximum extraction quality control while saving time and labour in the production of superior terpene-rich dry sift hash.

Operating Notes:  The powerful vibration unit must be operated on a 100% level, solid surface to reach maximum vibration calibration levels.

‘The law of vibration is one of the basic laws of the universe. It decrees that everything moves, nothing rests, we literally live in an ocean of motion.”

The natural laws of the universe are very precise!  When vibrations disturb a medium, the disturbance travels through the medium from one end to the other in the form of a wave of energy.

These good vibrations create waves that naturally separate and extract trichomes from the cannabis and hemp plant.  By sending waves of vibration through the plant material of cannabis or hemp it literally disturbs the natural connection between the chlorophyll rich plant material and releases the glandular trichomes.

The way you regulate the energy of the vibration will determine the quality (potency) and quantity (yield) of your end product. A higher amplitude will allow the buds to jump up and down higher. A lower amplitude will reduce the height that the buds or trim oscillate on the screen top, but due to the increased frequency and force, this may yield a better outcome of material. Higher vibration forces will allow you to flow more material.

Vibration breaks the friction between the trichomes and buds and allows them to fall off the bud, and sift down thru the various micron size screens.  Basically, the vibration breaks the fiction boundary between the trichomes and the mesh, which allows the trichome heads and tails to fall all the way down to the bottom screen, while the debris and other contaminants are trapped above. Vibrational sifting with multiple screens of different microns will quickly and efficiently capture 3 different grades of hash.

By adjusting the vibrational energy intensity (amplitude) and frequency (Hertz) you can regulate how your buds or trim react to the waves of vibration.

The vibrational energy will gently move the botanical material in a back and forth motion called the amplitude. The botanical material will follow the curve of that graph when vibrating on the table. The distance between the max peak and the min peak is known as the wave height, which is amplitude and oscillate each bud and leaf (oscillation is measured in hertz).

By adjusting the vibration speed on the controller, you will be adjusting the amplitude and the frequency as well as the force acting on the buds or trim. Depending on the density of the material (is it wet and sticky, or dry?), and the weight on the top screen, will determine the best speed to run at.

Vibration control is at your finger tips!

The vibration will cause the buds and trim to oscillate on the screen top. The oscillation can be adjusted with the speed controller.

Decreasing (lower) the amplitude will reduce the height they oscillate on the screen top, but due to the increased frequency and force, may yield a better outcome of material.

Increasing the vibration forces will allow you to flow more material.

feedback
Top
Welcome to Wacky Willys Yes, we are still open and shipping daily . You must be 19 to enter this site!
Cart Item Removed. Undo Have a coupon ?
Proceed to checkout
Cart - $0.00